Is The Beyond Burger Healthy For You?

Plant based diets are on the rise, and plant-based products, which mimic the taste, look and feel of real meat, are taking the food industry by storm

Take for example, The Beyond Burger (a veggie burger) is now on menus at 9 food chains including TGI Fridays, Carl’s Jr., and A&W.

The Beyond Burger is often billed as a healthier and more environmentally friendly alternative to beef, but can a burger that is processed and made up of 22 ingredients be healthier than a traditional piece of beef?

The Nutritional Difference Between Plant Based And Traditional Beef Patty?

Let me start by saying that the nutritional difference between the Beyond Burger and a traditional burger is not huge.

But there are a few differences worth mentioning.

The Beyond Burger is also significantly higher in sodium but does offer a small amount of fiber (3 grams), where a traditional beef patty offers none. 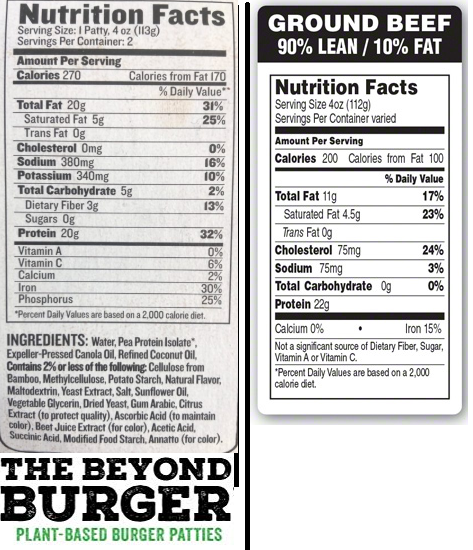 The Beyond Burger has more fat which comes from both canola and coconut oil, while the beef patty’s fat is from saturated fat.

The Beyond Burger, is made from pea protein, (which FYI can produce a lot of gas) and has a tiny bit more vitamins and minerals than a traditional beef patty.

So, How Do They Compare In Taste?

My husband and I grilled up some Beyond Burgers and beef burgers a few weeks ago and did a taste test. I will say, The Beyond Burger does a great job mimicking the appearance of real ground beef.

My husband didn’t like the taste of the Beyond Burger. I on the other hand, liked it. It didn’t taste beanie, and it had a softer texture than a regular beef patty, which I liked, but my husband did not.

So, Is Fake Meat Really All That Healthy?

With 22 ingredients, The Beyond Burger is far from a minimally processed food. A lot of manipulation has gone into transforming peas and potatoes into something that looks and tastes an awful lot like a hamburger.

If your goal is to eat more whole and minimally-processed foods, then this burger would probably belong in the category of something that you’d enjoy occasionally but not as a daily staple.

On the other hand, if your goal is to eat less meat and find the sustainability of raising cattle hard to stomach, you might decide that more has been gained than lost here.

The bottom line: Meatless burgers are good for the planet, and can be part of a healthy diet, but shouldn’t be your protein source for an every meal. I recommend eating this burger on occasion as a substitute for real beef.

What’s your take? Have you tried the Beyond Burger? Do beefless burgers have a place in your diet? Why or why not?

The 4 Laws Of Protein Which Diet Is The Most Sustainable?

All diets work – all of them. Why? Because you are in a calorie deficit when you are following a… This super easy and tasty recipe. The oats will keep for at least 4 days if stored in an airtight… This comforting autumn dish is super easy to make and only requires one pan. The tender brown sugar pork chops,…

Can you eat more than 30 grams of protein at once, or is it a waste? There’s no research that… Cooking dinner doesn’t have to be complicated or involve every pan in the kitchen. Try this simple one pan recipe…. Where are your calories coming from….real food or fake food? This is a perfect example why not all calories are…